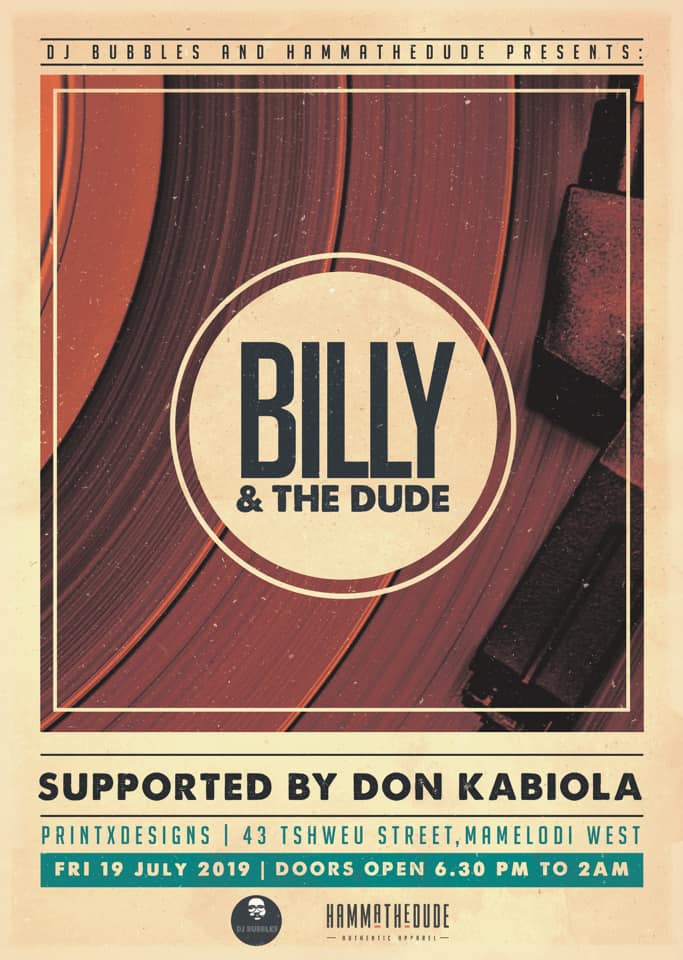 We often hear comments like, it was better back in the day. The quality of music was much better than it is today. It was done for the love back in the day, blah blah blah…well, we live now!

Now, I always imagine how it was and I do get a bit excited about it. The stories certainly leave me wishing I got a taste of that era but all I have is my imagination which is influenced by whoever I meet and have a conversation with about the music scene and night life then. Fortunate enough to be in a position where I meet a lot of the older cats in the game – I often hear many stories of how it was for them. 2 of these people being Dj Bubbles and Hammathedude.

Long story short, I saw a flyer announcing a party by Billy and The Dude. 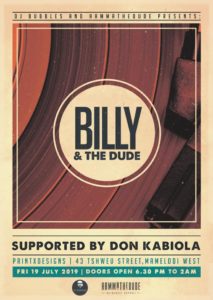 Now why write about this particular party is for a couple of reasons. One is the 2 deejays who are playing at this event. Billy Jackson, known to many of us as DJ Bubbles and Thabo Ndlovhu aka Hammathedude. To me these two are true representatives of the underground culture here in SA. Great deejays, vinyl collectors and musical influencers and they both poses a wealth of knowledge about music – they have been doing it for a while! Both from Mamelodi in the Pretoria, this party is a coming of two gents who have known each other for a lifetime now.

Could this party be a taste of what it was like in the past when they were at a groove? Look, I’m not trying to turn something that is meant to be fun into a lecture but if you ever listen closely to the music people play and just wonder why they listen/play that kind of music, you might find the story to be mind-blowing. For me this one of the things I love about being in this music scene. I wonder how much influence they had on each other regarding the music in general.

Secondly, Billy Jackson & Hammathedude, offer you a journey through the times. They have been doing it for a while, collecting for years, defining their sound and mastering the craft in deejaying. I’m fortunate enough to have been selling them records for years now and I’m always amazed by how wide their spectrum of the music they collect is.

This event can be possibly be one we will talk about when talking about parties that were solid. Only time will tell and this article will serve as a reference.

I caught up with Billy Jackson to chat about this party and find out what they intend to achieve with this. Parties in the underground seldom just pop up, I might be wrong. 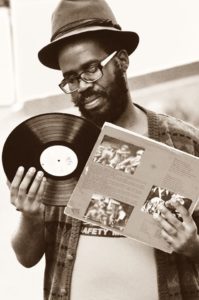 Of interest to me and many I would think, your name is very distinct, can you please share a little about it?

It stems from my love for 1970’s Black America and the title of the show reads like a Blaxploitation flick.

How would you describe the kind of sound you play when deejaying?

Like the intro to one of my favourite James Brown records, Bobby Byrd asks: What you gon’ play now? Then James Brown responds by saying Bobby, I don’t know. But whatever it is, it’s got to be funky!!! Funk, Jazz and soul music is the foundation of everything I play.

What influences the music you guys listen to, collect and play?

I never know how to answer that questions to be honest. All I can tell you is that ever since I discovered I had a deep love for music, all I ever wanted was to share all the songs that moved me in a profound way.

You guys have known each other for a while now and are from the same hood. How did your hood influence your music taste and collection?

Yeah we grew up together in a section called Khalambazo, Mamelodi East and I’m sure The Dude can attest that not only were our uncles music lovers, they were great record collectors with varied tastes in music too. So that obviously let to us following in their footsteps and incorporating that into our sets.

What is the idea behind Billy and The Dude? What are you guys trying to achieve with this party?

It’s just a hangout for like-minded folk that are into something different, a deviation from the norm. Music has the power to heal, I mean Bob Marley did say when the music hits, you feel no pain.